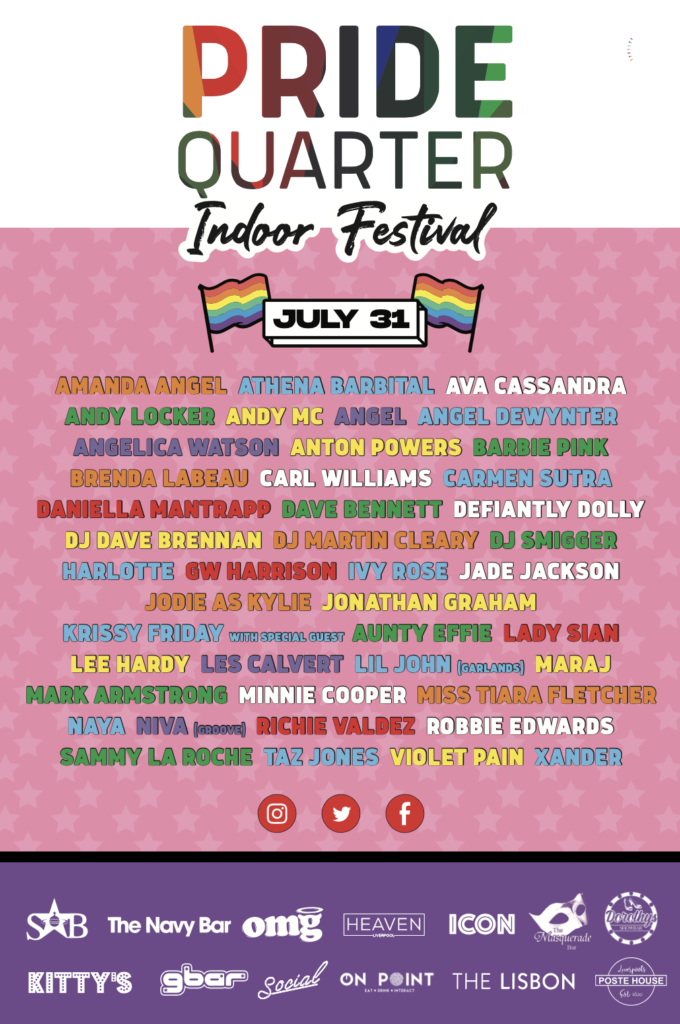 Last month the city’s LGBT+ venues came together to launch a new look for the city’s LGBT+ Quarter – Liverpool’s ‘Pride Quarter’. Now, working in partnership with LCR Pride Foundation they are set to mark the weekend that would have been Pride in Liverpool with a huge indoor festival taking place over 13 venues.

The Pride Quarter Indoor Festival is planned for Saturday 31st July, with venues opening as early as mid-day for Pride Bacon Sandwiches. Entertainment will then run right through to the early hours on Sunday morning with some venues also having a full programme of entertainment throughout Sunday too.

Alongside the indoor festival, GBar’s famous street party will return, as well as the Masquerade’s outside beer garden and pavement cafes at many of the Victoria Street venues.

From the scene’s best known Drag Queens and hosts to resident DJs and special guest performers, the line up is packed with round-the-clock entertainment.

Opening times: 12:00hrs – 01:00hrs
Line up includes: Candi plus special guest and Alison D
Kitty’s is also celebrating the weekend with entertainment on both the Friday and Sunday.

“While the situation is clearly concerning, Our first public event and flagship, Pride in Liverpool, is set to take place on Saturday 25th July. This is in the months beyond current guidance and, as such, we will not be making any immediate decisions. We will, however, be contingency planning and continuing to work with our partners and sponsors to plan a safe and successful event.

“Our board and event management team are reviewing our position regularly and implementing plans in accordance with any updates to government and WHO advice, as well as guidance from the European Pride Organisers Association (EPOA). On current advice we are optimistic that Pride in Liverpool and our annual March with Pride will go ahead. Any changes will be communicated as soon as possible.

For updates please visit lcrpride.co.uk or our social media channels.”