We’re back and taking to the streets once again in protest, solidarity and celebration; The high-profile hate crimes of last summer, the Government’s continued attack on Trans and Non Binary  identities and the injustice and discrimination around the world just shows there is still so much to come together and stand up for as a community.

In 2019, over 12,000 people from across Liverpool City Region and beyond took to the city’s streets, turning Liverpool City Centre into a sea of rainbow and togetherness. After our three year hiatus due to the pandemic, we are expecting record numbers to join us again.

March with Pride is free to attend and open to all.
To keep the event free, accessible and support the vital work of our charity we ask all businesses and organisations to make a suggested donation when taking part.
Read Frequently Asked Questions and T&Cs below. 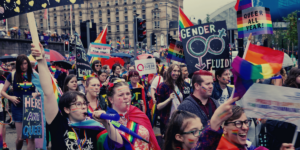 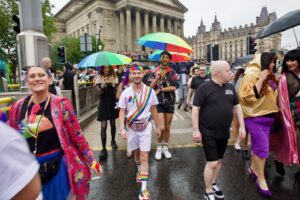 Looking for some placard or outfit inspiration? 👉

Check out the submissions for last year’s MarchONline which brought people together during the pandemic.

Do I need to register my group?

For crowd and safety planning reasons we ask all groups to register with us. You don't need to give us exact numbers or details at the point of registration - just your best guess! We will send your lead contact any updates, changes to timings or safety arrangements.

Do I need to pay to take part?

March with Pride, as with Pride in Liverpool is free to attend. We do ask those who can, organisations and commercial businesses to make a suggested donation - as well as contributing to the cost of arranging the annual march and festival, funds raised help our charity delivery our vital work. You can make the donation when you register, request an invoice, or donate via www.lcrpride.co.uk/donate

I am an individual marching on my own or as part of a registered group. Do I need to do anything?

No! Just turn up! If you're marching as an individual, you are welcome to just turn up and take part. Our stewards and volunteers will be on hand to signpost you to the best locations on the day. You can sign up to our newsletter on our website for more information.

Can I just turn up / Can I join the march later?

Our march is open to all - so yes! Please come along. Unless in areas needed for security, all of our march route is open and you can join at any time. Our stewards are on hand in each march group so just ask if you'd like to know the best place to join on the day.

Can my group involve vehicles/floats?

Sorry, our march does not permit vehicles or floats - other than those vital to crowd safety. We do this for two reasons; We want to limit our environmental impact and as a march that is open to all it also ensures that we can keep everyone safe no matter how many people take part.

Is there a theme or a dress code?

As ever, we're inviting you to take part and show the city region how diverse and creative our LGBT+ Community is. The march takes place on public highways so you may wish to consider what would be suitable for the environment and conditions. We'd advise comfortable footwear and outfits that can stand up to most weather conditions - just in case! Whilst our team will not be enforcing any dress codes, as the event takes place on the public highway, please keep in mind that attendees will be expected to adhere to any laws In place and these may be enforced by Merseyside Police.

Alcohol on the march

Neither the March Muster at St Georges Hall or the March Route are licensed to serve or consume alcohol. In many public spaces it may be against local by-laws to do so. Local authorities and Merseyside Police may enforce these laws. For security reasons no opened soft drinks are permitted through the festival security gates and no alcoholic drinks are permitted that have not been sold on site by authorised vendors. If you have access or medical needs that require you to bring your own refreshments, please email [email protected] or make yourself known to a steward at the event info points.

We are working to make our events as accessible as possible. We are currently in the planning stage, but will be able to advise about accessible viewing, level surfaces and support services closer to the event. You can sign up to our mailing list, or for further information please contact: [email protected]

Want to be the first to know?

Sign up today for news, campaigns and events taking place across the Liverpool City Region. Don’t worry, we take your privacy seriously so we won’t share your information with third parties.

“While the situation is clearly concerning, Our first public event and flagship, Pride in Liverpool, is set to take place on Saturday 25th July. This is in the months beyond current guidance and, as such, we will not be making any immediate decisions. We will, however, be contingency planning and continuing to work with our partners and sponsors to plan a safe and successful event.

“Our board and event management team are reviewing our position regularly and implementing plans in accordance with any updates to government and WHO advice, as well as guidance from the European Pride Organisers Association (EPOA). On current advice we are optimistic that Pride in Liverpool and our annual March with Pride will go ahead. Any changes will be communicated as soon as possible.

For updates please visit lcrpride.co.uk or our social media channels.”